Errors in the readme:

Haha oops... I screwed up there... you can tell I was working from a template. :-) *gets nervous Flaose will come back and report numerous other errors about the mod*

Alright, I went through and fixed those two parts of the Readme, and I swapped levels 05 and 15, so that the level difficulty is better distributed... the version on my Angelfire site is up to date.

Now I just need to be sure Andy, Xtra, and KeenRush mirror the fixed version!

Thanks for catching that, Flaose. :-\

I'll host the fixed version, thanks for fixing that. :)
Top

Cool, be sure to give me a link in here somewhere so I can edit it into the first post. Thanks again!

Thank Xkylyr for that -- it was entirely his idea. A very neat one, too, with great execution.

In a little while, once most Keeners have had a chance to play XkyKeen3, I'll post the relevant Ankh patches in the Keen:Vorticons section.
Top

Great idea indeed; I expected something like this because Xky was so interested about Ankh time and that kind of stuff. :) I thought there might be something different use for Ankh than god-mode.. Great idea, and it worked somewhat easily in the patching level as well. :) Very nice.
Top

OK... this looks like it will be amazing, but I can't get into it yet. I UNLZEXE'd the Keen3.exe, and then double-clicked on the XkyKeen3.bat, but when it opens up the background is flashing... I assume something isn't patching correctly? What am I doing wrong? I must know! I MUST!!!

EDIT: Oops... wrong version of Keen3. My bad, I updated it, and it works fine. Must PLAY it now!

EDIT #2: Oh, the brilliance. Oh, the sheer, unadulterated brilliance. Xkylyr, I would buy a hat just so I could tip it off to you. I'm still having a hard time believing that you did all that with a 16-color palette, let alone the DEFAULT 16-color palette. If it were not 4:30 AM, and I just got off my night-shift job and desperately require sleep, I'd play it for several hours right now. But everything I've seen in it so far is a complete success. Well, except for "reigon". In the story, you spelled "region" as "reigon". That's the biggest nitpick with the game I can find.
Top

KeenRush, you made the same mistake I did by working from a template! At the top of the updated page, it says Episode Null... hehe.

Thanks to Flaose and Ilsoap for catching my (many) errors... :-) Sorry about those. My spelling's not exactly spotless. Glad to hear you enjoyed the mod, though! :-D

I just got to the volcano level, and saw this: 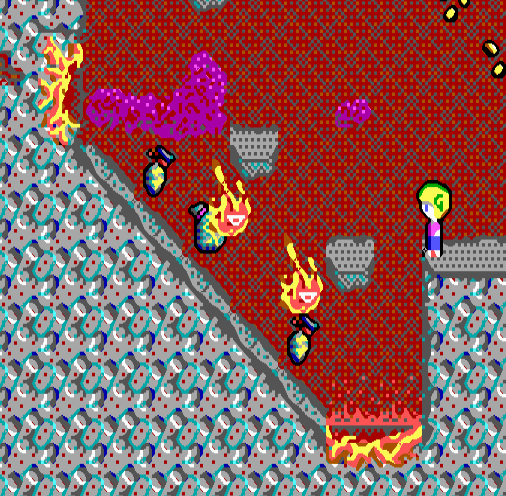 My first thought was "oh, he's just using the ice launcher". Then I remembered two things: Keen 3 doesn't have the ice launcher; and it doesn't launch blocks diagonally downward anyway.

Xky, I am totally amazed! How did you ever think of using the vorticon kids as fireballs??
Top

I noticed that Vortikids don't change direction until they hit a wall, and that they can't have a chance to jump if they're falling... So by setting them up with stairs, they just come tumbling down. What you don't see is that once they fall in that pit, there's a path of one-way tiles that leads them back up to the top... so theoretically if you just stood there and watched (hard to do because of the time aspect) they will just keep coming out. :-)

Originally, I had eliminated the hitbox from Keen's stun pose entirely, so that once you were tagged by a fireball, you dropped right off the screen to your doom... and originally, also, there was only one volcanic opening... but because I needed to have all those ground tiles be "foreground," it meant that as Keen was falling off the screen, you couldn't see him!! :-( So I replaced the hitbox and just had Keen grab his bottom and howl a bit.

I'm not sure where along the lines I decided the Vortikids would be fireballs, but I knew that I didn't just want to have rivers of death tile lava... that'd be too boring. This way gives you a chance to snag the points but be quick about it. :-)

The only bad part about them being fireballs is that while they're falling they're only displaying one frame of animation--the one in your picture. The player hardly ever gets to see their "running" frames, because they're always falling. Occasionally, one of the fireballs will jump on its way out of the volcanic cave--it never killed me during any of my playtesting, but I know it's possible. That level (12) is significantly harder than most others on Hard mode... you don't have time to get many extraneous points at all.

When i first read about the volcano i thought you were going to have jacks bounce out of tunnels then fly into the air, like an erruption.
Top

KeenRush, you made the same mistake I did by working from a template! At the top of the updated page, it says Episode Null... hehe.

LOL! :D It's fixed now! Yeah, I checked how in which form I had typed whole Episode Null name, and somehow accidentally copied and pasted the whole thing..

Anyways, volcano stuff is one of the best parts of the mod. It's so clever! I like the animation that Keen does when fireball hits him. X)

I see now the way you've made them loop around.. I should've have realized it earlier, that the sprites are brought back up via one-way tiles and all, but I thought until this that it was done by changing the horizontal gun shoot vortikids instead of ammos -- I even browsed around the patch files searching how it was done, but couldn't find.. :)
Top

Yep, it was in the Patchwork Mod. Although it reminded me most of the first aliens you meet in Cosmo's Cosmic Adventure (which I assumed that it was from).

And I love the appearance of the Exo-Matik. Having the robot arms doing the peace sign was hilarious!
Top
Post Reply
72 posts

Return to “The Mods”